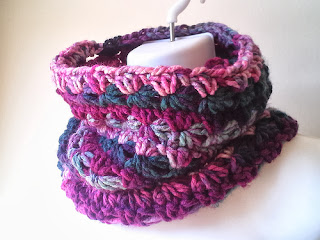 This month, in addition to cosy new items being added to my Etsy shop
(like that chunky cowl up there^), I'm offering Free Global Shipping
on orders of $75 or more until 09.24.2013
HERE .

Also, I'm totally late to the J.K, Rowling circle but I can't even get
over how much I'm enjoying her not-so-undercover-anymore book 'The
Cuckoo's Calling". If you're thinking about reading it, do. I've
already put the second book in the series on my TBR list. I saw on
Goodreads that it's due in 2014 & is already written. I truly don't
need one more series to try to keep up with but I'm thrilled to be in
on this one.

In kitchen challenge news, it's going very well. We've had various
dishes (that I've not photographed) since my last update, including,
chicken soup, Swedish meatballs, lamb chops & over roasted potatoes,
veggie curry (I had fresh mushrooms that I needed to use) & a very
successful pizza night. The cupboards are still fairly stocked & I
really don't anticipate having a problem putting off major grocery
shopping until October 25 or so. I'm making a pot of black bean soup
tomorrow because I discovered a bag of them in my cabinet. Dry lentils
move along fairly regularly in this house but I'd overlooked the black
& kidney beans.