Posted by smittenkittenorig on October 20, 2009

And I've got a good many things done in preparation for this month long noveling frenzy.

Now the only thing I'm on the outs about is the format in which to tell this madness. Okay, yes obviously you could say "As a novel, duh." But the thing is, I think I don't want to tell it...

Nanowrimo: The Place Is the Thing

Posted by smittenkittenorig on October 12, 2009 So I'm freezing & wearing my NaNoWriMo hoodie this morning & wondering about my story this year. I've been spending time with my characters and getting ever more clear about who they are & how they can be. I'm totally excited and can't wait to get started on this story.

My setting is the Pennsylvania mountains during autumn and...

Posted by smittenkittenorig on February 27, 2008

I'm still writing, and while that has its good points, it's also meant that I've not been keeping up my end of my affair with yarn. Why, oh why must it be so all or nothing? Is it some cosmic test for loving two things that are time consuming & wholly engaging? What to do? Actually, in a way I'd love to spend two solid weeks writing. Maybe it's just what I need & I should chuff the guilt of not...

Posted by smittenkittenorig on February 25, 2008

I actually went to bed late last night & also had to get up a couple hours later... because my muse won't shut the hell up. It's a writing day for me & I figured I should drop in and make a quick post.

Watched second dvd of S1 of Jericho. Broke down and ordered dvd. It was necessary, if we didn't, we'd miss the new season on OnDemand. ;) Spent yesterday with T (the hubs) & overall had a very nice...

From Mind To Industry To Fodder

Posted by smittenkittenorig on February 22, 2008 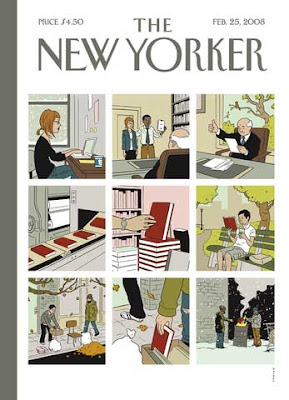 This week's New Yorkerarrived yesterday afternoon & I've yet to read it but I loved the cover! That's no surprise but when it's related to books, writing or publishing, it really grabs me. I like that it tells the story of a story not just a book. From the first frame where the writer is diligently typing on her laptop in her mod digs as snow wafts down outside her window to the final frame where...